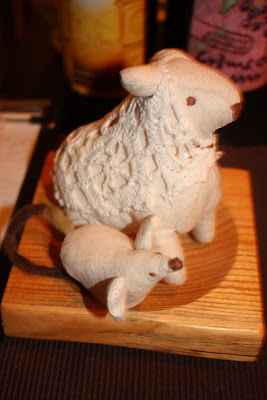 While this blog has been quiet lately, we're still on the island exploring and having fun. In fact, we're ramping up efforts to be as active as possible as the countdown to departure begins. We're down to about 6 months and time seems to speed up every day.
We've discovered a few great new restaurants around town. The first is inside a unique restaurant village area we discovered quite accidentally. There is a very old neighborhood of former US Military housing recently refashioned into a number of cafes, shops, and restaurants.
Driving through there one day, I saw the name Rat and Sheep, so you know I had to check it out.
The restaurant is owned by a cute young couple whose chinese zodiac signs are the rat and the sheep. Are you relieved the name had nothing to do with the type of protein served (at least when it comes to the rat part)? 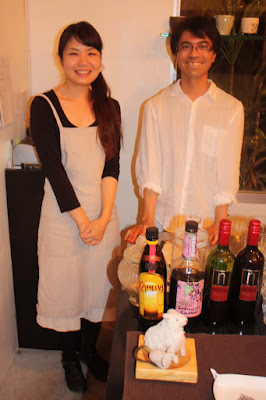 The set up is fun there. The kitchen is open to the dining room, or rather you basically sit in the kitchen while they prepare the food. The husband cooks the meat and steams vegetables on a stove right in front of you. Meanwhile, the wife is baking bread and other yummy delectable treats. 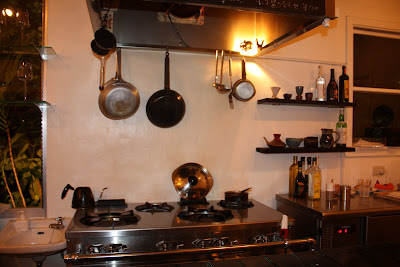 We ordered lamb and chicken with anchovy paste, both which were delicious, and we even bought their homemade bread to take home.
That night, we met another couple there who recommended Mintama, an Italian restaurant to us. Of course, not ones to shy away from local insider information, we had to check that place out next. 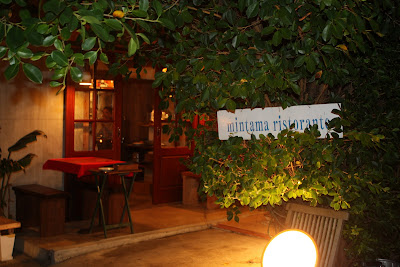 We were impressed with the salad (anchovy paste made another appearance in the homemade salad dressing), pizza, and pasta al la vodka. The restaurant also served Okinawan specialities, and it was packed inside. (A sign of a good place on this island) 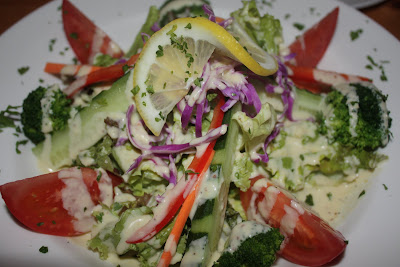 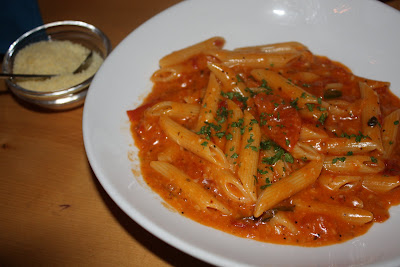 We're only half way through holiday season, and I think I've already gained some extra "insulation." How about you? Doing any good eating lately?
Posted by Mary and Sean at 4:53 PM 13 comments:

Pie is Stronger than Sleep

We just returned a week ago from a really quick trip to the States. We were there for a whole 5 days and turned around and flew back to Okinawa just in time for Thanksgiving. We escaped the full body scanners and pat downs at the airport (maybe they don't care as much once you're leaving the States), but we both came down with nasty colds from the flight.
Anyway, we were lucky enough to celebrate Thanksgiving holiday with friends on the island who make a scrumptious homemade feast, including this apple pie and this sauce from the Pioneer Woman.
All I can say is... jet-lag, extreme fatigue, a glass of wine, a cold, and a whole ambien couldn't keep me asleep the whole night so that I wasn't raiding the fridge at 3:00 am for a nibble of this pie.
I don't even like apple pie, but this one has me obsessed...
Posted by Mary and Sean at 4:31 PM 5 comments:

We have embarked on our toughest adventure yet. It is one that won't take us out of the house, but will push us to our emotional and personal limits. We are writing a novel together. That is right. We are going to sit down every night together in front of the computer and knock out at least 1666 words a night (yes, the sign of the devil can be found in that number).
You might be asking how and why did two intelligent people decide to embark on this type of journey since their thinking process is so different from each other. How will they be able to work together every night when they both have such different views on how a story should be written? All good questions since we are both wondering the same thing.
A month ago while we were driving around the island when Mary informed me that she had a great idea that was fun and something we could do together. She had found a website describing national novel writing month. After looking at her with a bewildered look and wondering how this was going to be fun, we decided to try our luck.
Tonight was our first stab at being the next Hemingway. To say things did not start off well is an understatement. Within 13 minutes of writing our novel my fun meter was pegged and I was ready to drink my wine and just be the typist. I had this vision of spending the first two nights setting the stage and working on the female lead's character development, moving on to the male lead on Wednesday, and then maybe by Friday introducing the character that would disappear and draw our two characters into a Hart to Hart type mystery (the two leads are married by the way). Within the third paragraph Mary had already thrown in the disappearance and completely thrown me off my game plan. Once that occurred the writing stopped, my temper rose, and I was told I was no fun.
I am happy to report that after a few minutes of cooling down the writing began again and we were able to complete our writing assignment for the night. We have set an hour each night to complete the task, and while we went over by ten minutes this evening, we are looking forward to accomplishing our goal.
For those of you wondering the working title is simply, Hell novel: A Tale of a Divorce in Progress.
Posted by Mary and Sean at 8:17 PM 7 comments: 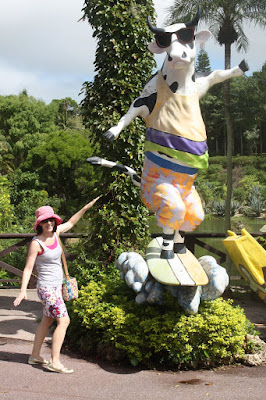 Who can resist a cow riding a surfboard?
The days have cooled off around here (a little), so I guess we can claim fall has begun. But we're still getting warm summery weather some days and even hunkered down for a typhoon this week. 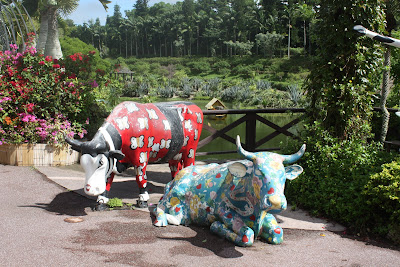 Even so, we've been enjoying the subtle change in weather and scenery. Last week, we visited the Botanical Gardens in Okinawa. I can't believe we'd never come here before. I'm a big fan of gardens, as they offer so much more than just plants and flowers. They are also super relaxing. 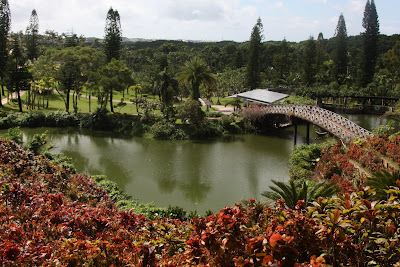 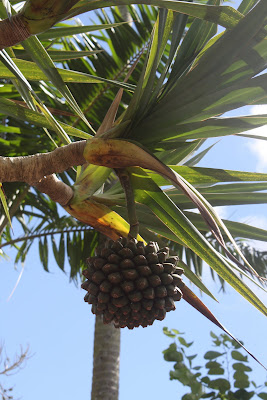 My favorite part of our day was lounging in the hammocks... I'll miss this when we leave next year. 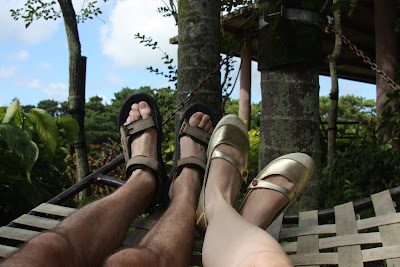 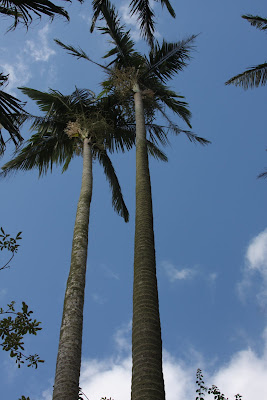 There were all kinds of interesting textures to admire and contemplate... 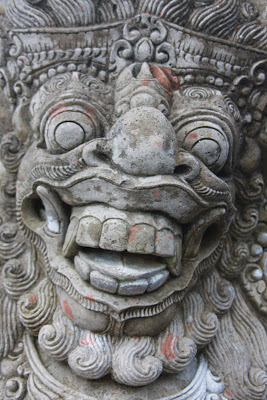 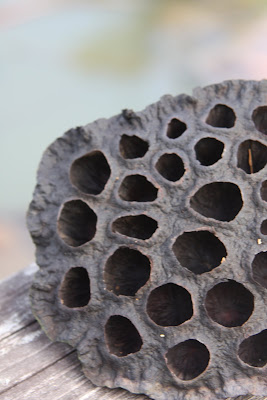 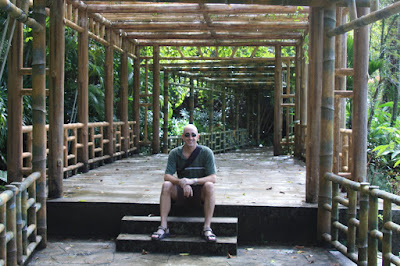 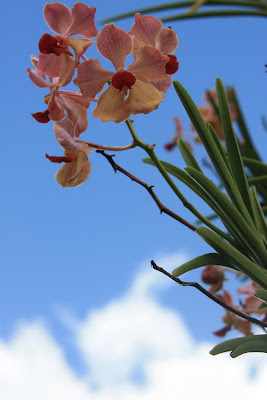 And I always love feeding goats... 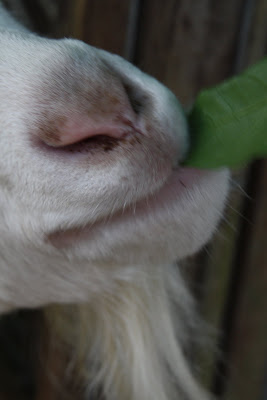 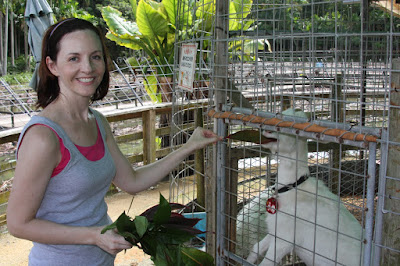 How are you enjoying fall where you are?
Posted by Mary and Sean at 2:44 PM 7 comments:

Dear Friends,
Please vote for me in the Trazzler Mt Rainier Writing Contest. I only need 3 more votes to be at least tied with the lead article! The deadline is Oct 24 for voting!
My entry is about the amazing colossal trees in the Grove of the Patriarchs. To vote, sign in to Trazzler and click save on my post. It only takes a minute!
Thanks and you are all stars!
Posted by Mary and Sean at 6:08 AM 2 comments:

A year or so ago, I visited a urenai, or Japanese fortune teller in Okinawa. I wrote a post about it recently for Matador Travel Network.
You can read the crazy adventure here...
Have you ever been to a fortune teller before? Do share!
Posted by Mary and Sean at 5:41 PM 1 comment: 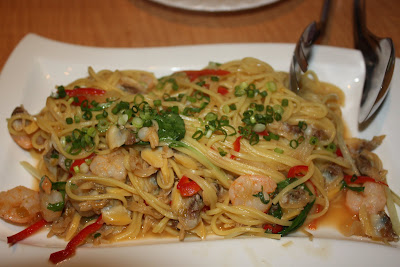 This past weekend, Sean and I tried a new restaurant in Okinawa called Bistro Chez.
The server handed us an English menu which listed pizzas and pastas. However, we noticed a board listing the daily specials in Japanese. I'm a big fan of daily specials in Japan as they are usually made with the freshest ingredients according to season. (I highly recommend getting the server's recommendations too) So we randomly ordered a few dishes without knowing what to expect.
Most of the time in Japan, we're surprised in a good way by the food, and that night was no exception.
Our meal started with an appetizer of oyster, shrimp, and salad. 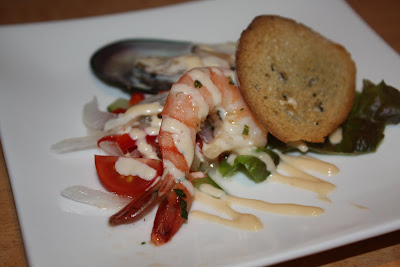 Next, we got a lovely mixed vegetable salad of pumpkin, eggplant, and okra. The dressing was a cold soy sauce based broth, and a nice extra touch was that the pumpkin was sauteed and warm! 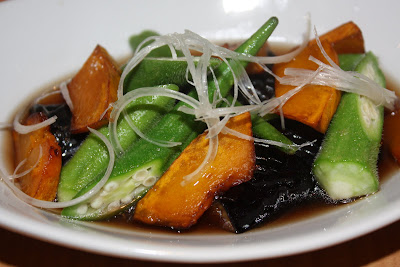 Our other plates included yakisoba noodles with shrimp and baby clams... 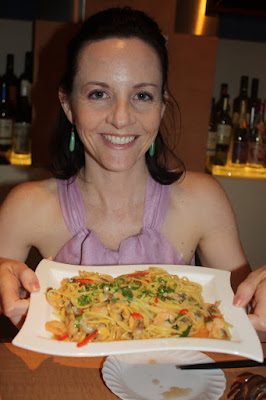 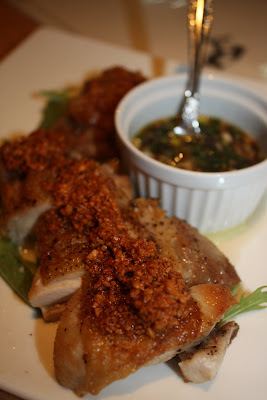 There was also a plate of penne with gorgonzola cheese sauce (not pictured as we had to dive right into it without pause for a photo). At first we wondered if we had ordered enough food. Anyone who has been to Japan knows that the portions are much smaller than what we're used to it in the States.
But you know what? We ate and took pictures (obviously) and had conversation. After eating, we felt comfortable and awake!
I actually really respect Japanese portions- especially for pasta and meat. They are sensible and focus on quality rather than quantity. 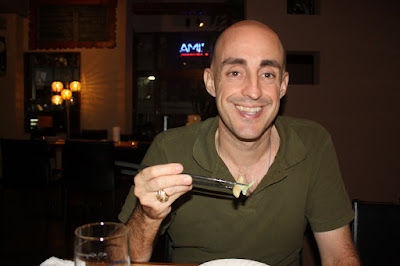 What's your view about portions? Do you believe in getting a lot of food for your money when you eat out? Do you think you'd starve in Japan?
Posted by Mary and Sean at 5:19 PM 8 comments:

Mary and Sean
We'll go anywhere for an offbeat experience. We both admit we fell in love during a negative 20 degree (balmy) vacation to see Northern Lights in Fairbanks, Alaska. Sean is a former Marine Helicopter pilot to both Presidents Clinton and Bush. I was a Peace Corps Volunteer in Namibia and English Composition Instructor at San Diego State University. Between us, we've traveled to Mexico, Costa Rica, Argentina, Botswana, South Africa, Malawi, Zimbabwe, Zanzibar, Egypt, Germany, Austria, Czech Republic, Italy, France, Tahiti, Hong Kong, Taiwan, Korea, Vietnam, Cambodia, and China. Upcoming 2010 travel includes Australia and New Zealand. Come along with us and we explore and eat our way around the world! Contact us: maryr_sd@yahoo.com

Video Travelogues- Come Along for the Ride!

If you enjoy this blog, why not become part of our community? We appreciate your input!